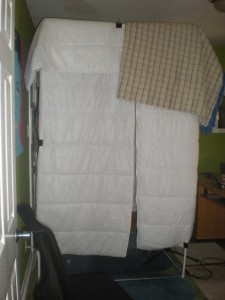 Clear, noise free sound is important to any project. Audiences are forgiving about all kinds of poor production value, e.g., bad lighting, low-end sets, shaky camerawork, but crunchy sound quality is barely tolerated. It was crucial for THE POWER OBJECT to have crisp sound and a quality mix. So series Technical Advisor Warren Fuller concocted this DIY sound tent. He originally designed it to record voices for his own MTV pilot HAMSTERS, and it was reused for my series. Constructed out of ¾ “ PVC Sch.40 pipe, Ikea comforters and an old blanket and was erected in my home office. Voice talent stepped inside and did their thing while I directed them from outside–good sounds stayed in, bad sounds stayed out.